Yoshi has stuck to his staple look for over 20 years: red saddle, Timberlands, goofy smile. We’ve seen dinosaurs in Mario’s universe wear a few accoutrements–Birdo’s bow, Boshi’s sunglasses–but otherwise, the species is pretty low-key. Given the opportunity to deck Yoshi out in only one new item, what would each of our critics choose to spice up his style?

I think we need to reiterate the fact that this guy is an omnivorous, hundred million-year-old creature, and he will fucking eat you. Something to badass him up without making him PG-13. I’d give him a nose ring, which would also help camouflage whatever gigantism has taken over his ever-growing snout. 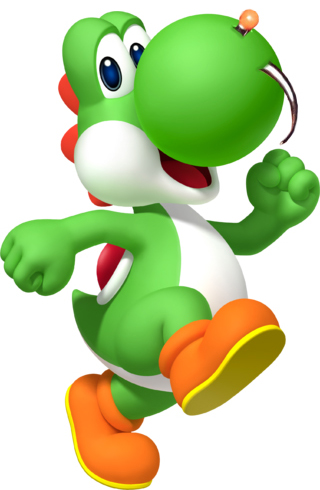 I mean, call me crazy, but I think the guy at LEAST deserves some teeth. Maybe not some giant pointy chompers, but at least enough to not feel like I’ll just be gummed to death.

After years of being mistreated by Mario, I think Yoshi should get something that tells the world “I’m not going to stand for this guy riding me, punching me in the face, and then leaving me to die.” My suggestion is a circular saw blade on his back on top of the saddle. It has the dual purpose of scaring off any would-be riders and also serves as a kind of mohawk.

3 thoughts on “One Item Makeover | Yoshi”