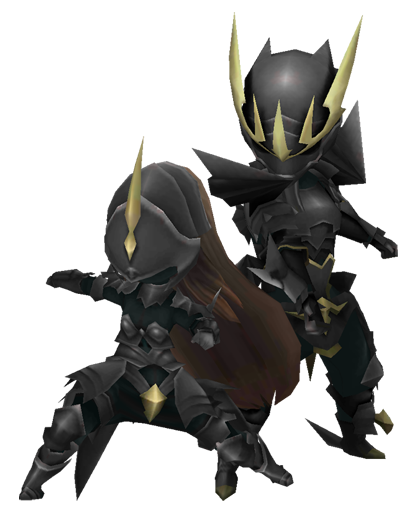 Ooo sharpey sharp. Kind of like pokey ants? These are very similar except for helmet spikes and shoulder things. I think he wears it a little better because the hair flowing from her helmet detracts from the overall look. Gents.

Like Batman meets Gundam.  The biggest differences here are the headpieces and boots.  Gents have a lot more crap on both, so I’m giving it to the ladies.  Why does he need five spikes on his head and BOTH spurs and a forward spike on his boots? They’re also gold, which is super shiny and counter-intuitive to being a “dark” knight.

As much as I don’t care for that boot/spurspike, I think the gents’ helmet actually looks more stylish. Also, if we’re going to mock the Templar for attention-grabbing crotches, the Ladies’ Dark Knight should receive similar critique. Gents.